So, the A-Rod fiasco actually surprised me.  Yes, I feel really, REALLY stupid, but I thought he was clean.  It really hit me that when people say “everyone was doing it” or “it wouldn’t surprise me to hear that anyone was on ‘roids,” they may not be exaggerating.  So, I thought to myself, who actually would surprise me if they were on that list of 104 or if they, at some point, took steroids.  And, honestly, it wasn’t that easy to come up with twelve.

[By the way, I had this idea before I listened to the Sports Guy’s podcast, where they talked about it–it almost made me not do it, but I liked the idea.]

I limited it to hitters because, honestly, I don’t know how to tell about pitchers.  I mean from Ryan Franklin to Guillermo Mota to Roger Clemens to Andy Pettitte–all very different styles of pitcher, with very litte in common, so I stuck to hitters.  First, I stuck to the stars because, honestly, it would not surprise me at all if someone who was a borderline major leaguer did anything to try and “stick.”  I also tried to find players that either (a) did not depend on power for their skills, (b) have a naturally powerful build, (c) have consistent numbers throughout their careers, OR (d) just don’t seem like the “cheating” type.  Granted, this last one is pretty impossible because we don’t know these people and it’s wrong to try and place judgment on baseball players as people.  Anyway, here is what I came up with:

12. Vladimir Guerrero.  The thought behind Guerrero is two-fold.  One, he is so naturally gifted (maybe the most naturally-skilled hitter I’ve ever seen) that he wouldn’t need steroids.  And, two, he seems kind of aloof and not intensely competitive.  Yes, aloof (in the kind of dumb way that Guerrero seems) may actually lead some to be more likely to try steroids, but I just don’t see it in Vlad–and I’m not sure why.  Like I said, it was harder than I thought it would be to come up with 12 that would surprise me.

11. Ryan Howard.  Howard falls purely into the category of “naturally powerful.”  Again, I have nothing really scientific to base this on, but Howard’s strength looks like it fits his body type.  I don’t think it looks unnatural, in any way.  Yes, I know that I started this list of “clean” baseball players with two injury-prone power hitters, but I ran out of names.  Another thing that might make Howard less surprising is that he did spend a lot of time in the minors and may have thought he needed a “break.”  But, I really just don’t think the big guy is big for any reason other than genetics.

10. Bobby Abreu.  The main reason that I picked Abreu for this list is because, well, I just don’t think he cares enough to take the risk.  I never have anything but positives to say about Bobby Abreu (I admit to having an unhealthy, completely unobjective affinity for the former Phillies rightfielder), but the one thing that I do admit is that Mr. Abreu is not exactly the fiercest competitor.  That and the fact that, even though he loved be a 30-30 guy a little too much and took a LOT of joy in winning the home run derby, I don’t see power numbers being as important to Abreu.  Then again, he did have his biggest power numbers right in the heart of the steroid era…but, Bobby wouldn’t do that.

9. David Wright.  This one doesn’t really have anything to do with anything other than I have a lot of respect for David Wright, despite the colors he chooses to wear on gameday.  He seems like a respectable person and I think his game is so balanced that power is, sort of, the cherry on the top of his talent.  Yes, I know, 4 straight power hitters in top 5 markets–probably not the best place to find “clean” players, but I believe in them.

8. Lance Berkman.  The only reason I even considered Berkman for this list is because he has been SO vehemently opposed to steroids and vehemently in favor of drug-testing for a long time now.  Granted, that does not prove his innocence because the guys that scream the loudest against something are often the ones with the most to hide, but for some reason, I believe the big ole Texan.  You know, as much as I believe another big ole Texan that starred for the Astros.

7. Miguel Cabrera.  Have you seen him, recently?  Does he look like a guy who, uh, spends a lot of time in a weight room?  If Cabrera is the example of what you become on steroids, do you think it would really be the problem that it is?  Plus, he combines a lot of the things that I see in Guerrero (insanely talented, but kind of aloof) and Abreu (doesn’t really seem as competitive as most professional athletes).  Throw in the fact that he’s been a superstar his whole life, so why would he need steroids?  You know, just like A-Rod told Katie Couric.

6. Omar Vizquel.  Omar was one of the first guys that came to mind when I thought of doing this because he clearly fits the bill of someone whose game really has nothing to do with power.  He is one of the two best defensive shortstops that I have ever seen, and I, as a light-hitting shortstop in my day, idolized Omar.  The one thing that kind of threw me, though, was the fact that Omar, in even fewer at-bats, had seven times as many home runs in 2002 as he did in 2001.  But, it’s not like 2002 was the heart of the Steroid Era or anything.  Even still, I think Omar is clean because his game was defense, and that did not require power.

5. Derek Jeter.  The poster-boy answer to this question.  He is probably the first guy on most people’s lists, and to be honest, he was probably the first guy that I thought of.  But, at the same time, that is also why I wanted to leave him off completely.  But, with all integrity, I do see an upstanding person who is a great (albeit, probably overrated for a number of reasons), great player.  But, he does not rely on power to be great.  He does not look like anyone with unnatural strength.  And, his work ethic has never been questioned (though, the same has been said for Mssrs. Rodriguez and Clemens, as well).  But, in the end, he did play in New York alongside Giambi, Knoblauch, Rodriguez, Clemens, Pettitte, etc.  And, he does seem to have that win-at-almost-all-costs competitive fire, so I do think that there are four players that would surprise me more if it came out that they were ‘roid-heads.

4. B.J. Upton.  One, Upton is insanely talented, with so much going for him, on his own.  Two, he was only 14 years old when McGwire and Sosa were going after Roger Maris, in the summer of ’98, so he may have missed the “culture” of steroids.  For those two reasons, I would actually be very surprised if it came out that Upton was on the juice.

3. Ichiro.  The one thing that I keep pointing to, in thinking about Ichiro’s place in this whole era is that he came to the United States in the middle of his baseball career.  I have never heard of any steroid controversies in Japan (though, I could be way off on this), and Ichiro was every bit the player he is in the States when he played over in Japan.  His game is about speed and quickness.  He is often put down because of his lack of extra-base hits.  And, he is about 150 pounds.  I would be downright shocked if Ichiro was involved in a steroid scandal.

2. Josh Hamilton.  Hamilton is a very interesting case in this because he made his major league debut last year–7 years after being picked #1 in the draft.  He has been described by some as having more natural talent than anyone in the history of baseball, so his recent major league success could certainly have nothing to do with anything illegal.  Also, Hamilton’s substance abuse problems have been well documented.  He has had major problems with both alcohol and many levels of drug addiction, including heroin.  But, he has been clean for two and a half years now, after being out of baseball for several years.  This is an interesting case because there is absolutely NO DOUBT in my mind that Hamilton is not taking any substance now because of his commitment to recovery.  Whether or not he dabbled in the minors is another question, but I believe that his drugs of choice were recreational, as opposed to “professional.”  And, he is dominating the major leagues now–completely sober–so I would be very surprised if Hamilton’s career has been aided, in any way, by steroids. 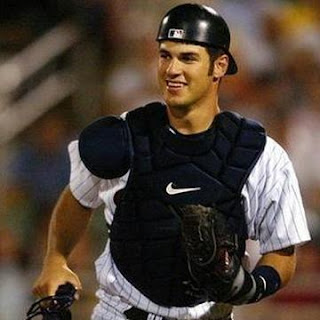 1. Joe Mauer.  Maybe an anti-climatic ending to this list, but there is no one in baseball that would give me more of a surprise that they used steroids than Joe Mauer.  Maybe it’s because he is a slender catcher.  Maybe because he’s been a superstar athlete his entire life, who never needed a “leg up.”  (Did you know that he only struck out ONE TIME in his 4-year high school career, including a .605 batting average his senior year?  Uh…what?!?)  Maybe it’s because he only has 44 career home runs in 5 major league seasons.  Maybe because he has that Midwestern “choir boy” reputation.  Maybe because he’s the hometown kid playing away from the pressure of the big cities or one of the coasts.  Or, most likely, it’s a combination of all of those things.  I would be absolutely DUMBSTRUCK if Joe Mauer joins Bonds or McGwire or Palmeiro or Sosa or Clemens in the minds of baseball fans.  SHOCKED…but then again, in the Steroid Era, it’s clear that anything is possible.

Please, feel free to chime in with any comments on this list or submit a list of your own.